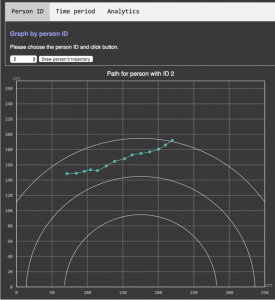 Public displays are used in many public places such as city squares, universities, malls, libraries or bus stations. The public display content may vary depending on their purpose and the type of presentation. However, it is not always clear how public displays and their content influence everyday activities in the environment where they are deployed; how people behave, move around, and use the displays and their content; and how effective is the display content according to requirements of different stakeholders.

This thesis presents Attentive Public Displays (APD) – a tool that captures movements of people in front of public displays using depth sensor data and provides visualization and descriptive statistics of the audience movements. First, the thesis shows the design and implementation of the tool. It describes the software components and algorithms for capturing depth information, detecting people and their movements from the collected depth data, and representing and storing the movements in a database. The database entries containing people movements are further structured in a more understandable way, using additional filtering and data mining techniques to present the paths in a simple to use Web interface. Then, the thesis presents the evaluation of the performance of the developed tool based on three metrics: Accuracy, Precision and Sensitivity.  The evaluation of the tool is based on 15 captured videos, each of 5 minutes duration. The number of people in the videos is manually counted and contrasted with the data captured by the tool. In total the tool correctly detected 211 people out of 226 people counted manually in front of the display. The average accuracy of the tool is 90.53%, average precision is 95.97%, and sensitivity is 94.21%. Then, the thesis presents a real-world deployment of the tool in front of a public display located in a busy hall in front of the university canteen, where the tool collected 6 weeks of data. Finally, the thesis discusses the limitations of the tool and present possible improvements.

Collaborative Economy Practices and Communities in Switzerland – A Case Study

Affect and Learning in the LAUREATE Dataset