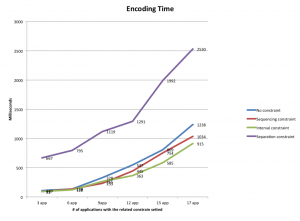 Public display systems are increasingly becoming part of the urban landscape, with systems being deployed in venues such as railway stations, shopping malls and city squares. Most of these public displays are simple slide show systems that broadcast content based on a predefined schedule, or a playlist, that does not change during the runtime. However, supporting interactive applications and more relevant content, public displays must be reactive to the user input and their preferences.

As a follow-up to the international research project “PD-Net”, we are deploying a number of large public displays on the USI campus. These displays will form a part of an open display network that can show interactive and concurrently running applications and allow display users to influence application and content scheduling. Spontaneous user interactions are hard to predict and can occur at any moment in time requiring public displays to adjust, or reschedule, applications and their content. Thus, the displays need to produce a new schedule, or a playlist, every time there is an input from the users.

The main goal of this project is to develop and evaluate the performance of a “rescheduling component” for public displays that produces a new schedule every time a user starts interacting with a display based on a given set of applications, associated constraints, and previous states of the display.

The software basis for this work should be a) a web-based template for developing public display applications called “WE-BAT” developed at USI, and b) the SMT solving framework for expressing and solving scheduling problems. SMT solvers combine a rich and flexible high-level modeling language with efficient decision procedures. In the course of this project, an SMT solver, such as OpenSMT developed at USI, should be used to produce a display schedule based on the WE-BAT application template.

Creating an Experimental Apparatus for a Digital Health Literacy Experiment

NDA: Developing Networked Public Display Analytics Based on Classifying the Audience in Front of a Display and Mapping Them to Interaction Zones