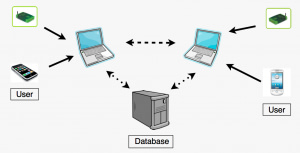 In the modern age of communication and transport, it’s an increasingly common scenario for the average person to have friends scattered all around a country, if not around the world. Despite the modern social networking platforms and the increasingly common use of VoIP software, it is still rather difficult to keep in touch with friends and colleagues, mainly due to the differences in people daily schedules. The goal of this system is to help “friends” to remain in touch despite distances and time constraints, using a same-time-free-time approach.

The same-time-free-time approach is based on the chance of two friends having some free time in the same moment, thus having the opportunity to (virtually) meet each other; what it’s missing is a system that is able to exploit these free-time at the same time occurrences, allowing friends to keep in touch. The basic idea is to have a computer connected to a motion sensor, a blue-tooth antenna and a webcam; this way, the system is able, respectively, to detect users’ presence, to recognize users through their bluetooth devices’ unique MAC address and to automatically open a sort of “virtual window” with another similar system in a different location where another user, recognized as a friend of the first user, is recognized through the same process.

Investigating the dichotomy of sharing practices in virtual and physical realms: from theoretical overview to design considerations (SHA21.A)