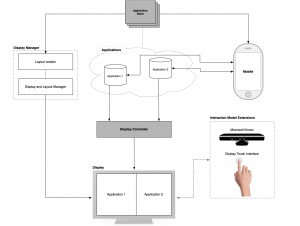 Public display systems are increasingly becoming part of the urban landscape, with systems being deployed in venues such as railway stations, shopping malls and city squares. Most public displays today are simple slide-show systems that broadcast content based on a pre-selected schedule. However, public displays envisioned in the near future will provide a rich platform for running diverse interactive applications with highly contextualized and personalized content. These applications will allow viewers to express their preferences both explicitly through interactive touch interfaces and implicitly using mobile handsets.

The main focus of this thesis is to create a new architecture capable of supporting a wide range of applications that can be deployed on a distributed display network. Moreover, users will have a chance to influence applications displayed the screens either with their presence or by direct interaction with the screens.

In this report, I will explain the system’s architecture and how we used the latest web 2.0 technologies provided by HTML5 API in order to provide the desired functionalities. The components that have been developed are a display manager, an application repository, an initial set of applications and of course a display component.

The result of this work has been an initial set of application that can run concurrently inside a single display. An additional characteristic of these applications, is that they can be influenced both in their aspect and in their content via the interaction with the mobiles phones of the nearby users.

Creating an Experimental Apparatus for a Digital Health Literacy Experiment