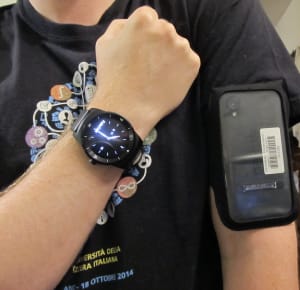 Life logging emerged as a way to capture and remember more mainly through pictures. However, as life log- ging becomes increasingly mainstream, the volume of captured content also increases but our capacity for reviewing diminishes. In order to limit picture taking on such devices to only the most memorable moments, we propose a biophysical driven capture process that adapts the camera capture rate based on one’s heart rate. In our prototype called PulseCam an Android smart phone worn on the body acts as the picture capture device, adjusting its capture rate based on one’s heart rate as measured by an Android-based smart watch.

The purpose of this work is two fold:
a) we examine the potential of PulseCam to capture pictures of significant moments and
b) investigate the potential of such pictures to improve one’s ability to remember.
This paper introduces the general approach, describes our current prototype, and outlines the planned study design.

Design and Evaluation of a Smartphone App to Support Sharing Physical Objects (SHA21.C)